Letting the Light In

We recently ran across this post from a client who used us to restore and replace a wall of glass windows in a gorgeous mid-century home by architect Frank Shell.

Here’s an excerpt from his description of the window project:

When we first moved in, a woman who owned a window company showed up and left a card with us and said that the previous owner had gotten her to quote some window replacement and she ended up emailing us the bid. Oh my god I’m so glad these people lost the house. They were planning on replacing all the windows with vinyl and putting up ugly plastic awnings. They wanted to take out the beautiful 12 foot all glass sliding door and replace with vinyl french doors. I truly believe that would have been a deal breaker, for us at least. In my mind that would have ruined the house and the cost to replace all the vinyl (not to mention the waste) would make it not worth it for us. 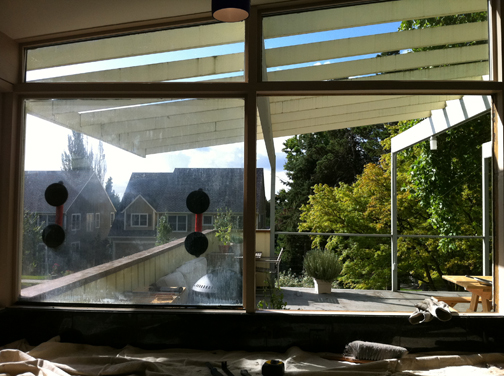 With that said there were some windows that were in need of replacing. 7 windows had failed, meaning the insulation was not working. I think part of the blame was the lack of upkeep and the neglect of maintaining and/or replacing the roof. You can tell a failed window simply by the clarity of it. Over time it becomes cloudy with all the condensation gathering inside.

In the photo above you can see the windows being replaced. On the left is an old window that is cloudy. On the right there was a similar window but it has been removed.

You can read the rest of this homeowner’s experience here. We were delighted to participate in the restoration of this quintessential example of the NW Mid-Century Modern style.

Explore the Arciform Photo Galleries | All About Arciform